The Nuleaf Naturals Company on our focus today is the reflection of the modern market – average yet strong, producing nice products yet with some black spots. The entire wing of CBD production is under-regulated and this situation hopefully to be improved. Since this does not happen (yet) due to the opaque position of the FDA (and we even hear the tiny voice of the DEA on the market (but never about the Nuleaf Naturals Company, so worry not)), we can only judge what we hear, see, and taste. We’ve tried 1 product of the Nuleaf Naturals Company – and we’ve stayed completely satisfied with using it. Yet, we have not seen the third-party lab tests for the product of the company (so we are very disappointed, as we’ve had such a promising start).

Eventually, even despite the fact that we assign to the Nuleaf Naturals Company 1 star out of possible 5 for hiding the lab test results from the public (even given that they possibly can exist), for the quality itself (as far as we feel the effect that the products do on the human body after the intake), we still consider it is of high quality and average pricing (which combination is actually quite satisfactory). The overall score given by us to the Nuleaf Naturals Company is “passable”. And, since we don’t see major drawbacks of the company’s style of doing business and the quality submitted by its consumers, we really hope that in the future, as the Nuleaf Naturals Company submits all third-party lab tests to the broad public, our estimation can shift to 4.5 stars out of 5 – there’s entire potential to have that.

We admire the Nuleaf Naturals Company for being a new player on the market, which already shown what strong sides it has. The focus on the quality over quantity in the product line is what exceptionally intriguing. There are no other products but CBD oils – with different potency and of full-spectrum. No other thing the Nuleaf Naturals Company manufactures. You can be thrilled with that aiming at the result. That’s really far from what market offers today. But that is an extremely appealing thing to many.

Now let’s see what the company offers in terms of other things, besides the production.

Let’s now take a look at the pros and cons of the Nuleaf Naturals Company.

Today, there isn’t going to be a large list of products in our review. So far, the Nuleaf Naturals Company sells only CBD full-spectrum oil. 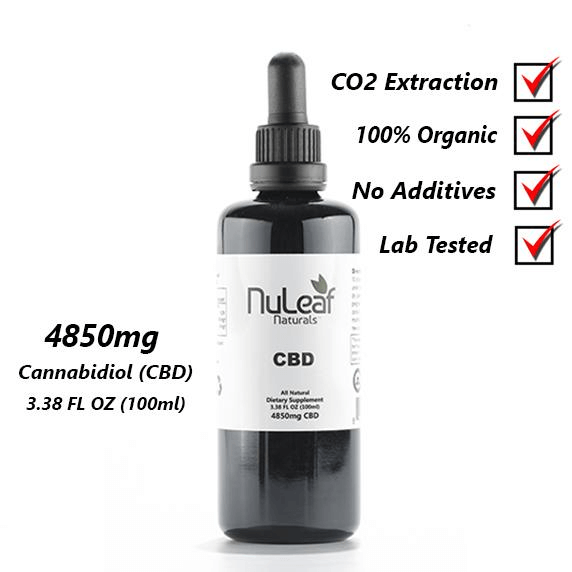 The full range of products of the Nuleaf Naturals Company is as follows:

Every vial has 50 mg of CBD per 1 ml. The bottle becomes bigger and bigger depending on your choice. We are not sure what makes the company be so different in the number of mg from other manufacturers (why not rounding them to, like, to 750, 1,500, 2,500, or 5,000 mg). But it looks like the sizes are strictly tied to ounces (0.17, 0.5, and 1 oz) – just to make it comfortable for the US residents. No wonder that the Nuleaf Naturals Company does not ship outside the US.

Also, every vial is relieved from additives (like heavy metals, chemicals residuals, pesticides, chemical fertilizers, herbicides) and it is lab-tested (according to what the company says itself) & hundred percent organic. We will not repeat that the process of CBD oils extraction for every drop of CBD oil is done using the CO2 extraction method (hey, looks like we’ve repeated it, after all!). Why it is so important to have the purity of growing of hemp (without pesticides, chemical fertilizers, herbicides)? For those of you who don’t know yet, it is expedient to tell that hemp is a kind of a plant, which cleans the soil form contaminants. So if you add to your hemp plant any of these, it sucks them in and leaves preserved in the stem, leaves, and seeds. You don’t want that, do ya? You don’t. Also, the soil for growth should be cleansed from all these in the first place, before planting. That’s why the natural and organic growth of every hemp plant is so important. Eventually, this is to keep your body clean.

In the pet products, you can select the potency of the things: 240 mg, 725 mg, and 1,450 mg. The size of the bottle changes as well – from 5 ml, through 15 ml and to 30 ml (so to make the potency per 1 ml stay the same, 50 mg/1 ml). The cost of it will vary from $38.50 through $99 ending at $179. As the manufacturer says, the remedy is suitable for dogs, cats, and rabbits. It was not tested for parrots (as the manufacturer puts it, the remedy is only good for 4-pawed friends). The way to take it is simple: for every 20 pounds of the live weight of the home animal, you should add 2 or 3 drops of the substance. What if your pet weighs 30 lbs? Well, 3 or 4 drops as max should be okay. Give it 1 or 2 times a day – depending on the result you want to achieve. By the way – the manufacturer says this remedy is also good enough for humans. Well, let’s try?

There is only one position of the merch of the Nuleaf Naturals Company: CBD oil. Depending on the size and potency, you can acquire it for $38.50… $1.953.40. The latter price may seem really confusing – what possibly can be inside of a CBD-containing remedy to make it cost nearly two thousand bucks? But when you open the page with a product, which costs so much, you understand that this money is not for a single one but for a bundle of 6 (having potency of 4.850 mg per vial). The pack of three will cost ya $1,053.60. And the standalone loner is as expensive as $439. Well (considering the price of 1) buying 6, you actually economize $680.60 or nearly 35% of the retail price of 1 vial. That’s a good point to think about.

Our experience with Nuleaf Naturals

In the case of the Nuleaf Naturals Company, we did not have a large choice. So, we just stuck to something cheaper (logically). In this case, it was 240-mg full-spectrum CBD oil, 50 mg per 1 ml in 0.17-oz vial.

We gotta tell you – this small vial comparable to a finger contained 240 mg of CBD, which are usually enough for at least 5 days (if one would use 50 mg per day – as the regular CBD users would do). As we’ve had some preliminary experience with CBD (more than often, actually), we’ve exhausted the vial in exactly 5 days. The result? Well, three things we wanted to use CBD for:

We did not manage to check the third issue – as oils are not suitable for vaping (and hundreds of deaths in 2019 all over the world because of vaping oils, not juices, actually support our healthy view). The knee pain (commonly known as rheumatism) had to go away each time we were taking the Nuleaf Naturals Company’s product. The time needed to alleviate it was 10-15 minutes and 20-25 mg of CBD. After the intake of 50 mg during 1 go, the pain completely disappeared in 30-60 minutes. Although we did not see the long-term cumulative effect of taking this remedy (as well as it is the case with any other product, from other CBD manufacturers), the immediate effect was reached.

For sleep, we know that there are other products on the market (the most effective of them are ones with Melatonin, which is a known sleep inducer). But even without it, taking 50 or even 100 mg 30-60 minutes before going to bed actually gave its result. Falling asleep was smooth yet strong. Usually, we woke up during the night 5-10 times. With the Nuleaf Naturals Company’s CBD oil, it was shortened to 0-1 times. It would be great to continue the intake just to see whether the ‘1’ awakening during the night would eventually turn to ‘0’ – but during our test, we just did not have enough time to check.

Before getting in touch with the company a little bit deeper, we’d think it is just another brand that delivers the same quality, the same market branding efforts, and keeps the same pricing, like the rest of the participants of the market. But without the practice of publishing the third-party lab test results, it means that the company is not sure about its quality, hides it from the general public, so there is something wrong with the entire everything. What is it, in fact? Since there are no test results available and everything in this company seems not too publically open, we think more about the Nuleaf Naturals Company that it is a scam. Yes, we’ve had a positive experience with one of the company’s products. But what did we actually try still makes us wonder (as we don’t know about the content, without the lab tests)? So, eventually, rating it on the scale from 1 to 5 (where 5 is the best rating), we, unfortunately, shall give it 1 star. However, the situation can dramatically change after the Nuleaf Naturals Company publishes the publically available third-party lab test results, open and reachable for everyone 24/7/365. Until then, 1 star is going to be our personal rating for every piece of product the Nuleaf Naturals Company does. We do want them to improve, really, don’t get us wrong.